Research Report
Present: Professor Waffel, Doktor Døv and Professor Fokuda-san.
Date: September 3rd, 2009
At considerable cost, Professor Waffel arrived in Bergen by aeroplane on September 3rd to attend a long overdue research seminar at the Institution. The contents of the professor’s luggage proved to be of great interest at the airport security check, in particular the function of the W5 Secret Bird-Oscillator. Quote one of the security officers: “I don’t particularly like what I observe on my screen here”.
However, it was another device, a Tournament 6 PONG TV-game that caught the primary attention of the professor’s colleagues at the Institution. In 1951, a young TV engineer by the name of Ralph Bear designed a TV that enabled people to play ball and paddle games on them. However, the concept was not introduced to the general public until 1971. Entering into millions of homes across the globe during the 1970’s, PONG games were eventually out- competed by more sophisticated home computers in the early 1980’s. Nevertheless, in May 2009, Professor Waffel was able to acquire a PONG at E-bay.com/ww.com/com.org for a moderate price. 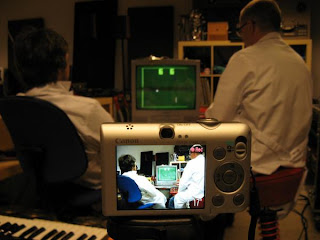 An ad-hoc test laboratory was promptly set up at the Institution, routing the PONG console through Professor Fokuda-san’s mixer with 6 separate auxillary inputs. In the absence of Doktor Pixel, who was still recovering from bowel problems and a chronic latency syndrome, Doktor Døv quickly took responsibility for visual documentation, while Professor Waffel demonstrated the general functions of the PONG console. It had been rumoured that the incident at the airport had given the professor slightly better communication skills, but this was not verified during the research session.
Obtaining considerable experience with manipulating the PONG ball into orbits between the two paddles, the research team were able to generate complex rhythmical meters to be modulated beyond recognition by Professor Fokuda’s auxillary effect line up. Meanwhile, fearing that the attention thus given to the activities occurring on the TV- screen would upset the general ecological balance of the Universe, Doktor Døv proceeded to experiment heavily on his transistor radio. By routing NRK through an LFO he obtained some disturbing results. But that was to be expected from Doktor Døv, after all

We refer to the application dated August 20th 2009. While the dissertation is long overdue, the committee has evaluated the dissertation and found it to be of sufficient merit to warrant a doctoral degree at the Department of Visual Research, Hemmelig Tempo. Congratulations.
Watch the dissemination on Vimeo